I am taking an ethics class this semester. It's my last general education class so it'll be all upper division science classes after this. It has been interesting to see many views of ethics from different philosophers like Socrates, St. Augustine, Nietzsche, Mills and Kant. My ethics professor does not believe in a God, so it is interesting to hear things from a point of view so different from what I would think. Even when I don't agree with him, I can often see where he is coming from and respect his opinion.

One thing he said recently made me laugh at its simplicity. He said that one of the problems with religions that believe in a God is the contradiction that we have free will, but God is omnipotent so already knows what we will choose, so what is the point? 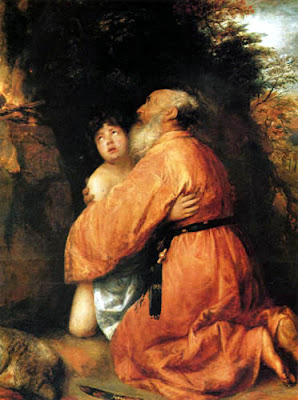 What is the point? Heavenly Father knows each of us and has known us and he really does know what we will choose, but we have been given the opportunity to show him and to show ourselves. We aren't here just to prove ourselves to him, but to us. Just as Heavenly Father knew that Abraham would be willing to sacrifice his son if asked, but Abraham himself didn't know at first that he would be obedient. He learned and grew from the test of faith. He was able to know that he is valiant and would do very difficult things if the Lord asked because he loved the Lord more than his desires, however righteous, and he had faith that if he was asked to do it, there was a reason, even if he didn't know the reason.

"In these defining moments, the crisis doesn't create one's character, it reveals it."
Lynn G. Robbins, "Tithing, a Commandment Even for the Destitute," Ensign, May 2005, 34

We have to be working on faith before we need it, not when the crisis arises. And rest assured, a crisis will arise. It is easy to say that we are faithful when our faith isn't being tested or that we could resist a temptation when we aren't being tempted. Or maybe to say we would give up our spot on the lifeboat to someone else if we were ever on a sinking ship, but we don't actually know what we would do until we are in the situation. So we are often put in situations that give us the opportunity to reveal our true character.

Of course, if we fail to pass one of the tests we've been given, we can learn from it and change so that we are stronger and more faithful. There will be another test and we want to be ready for that one. What is the point of progressing? While others do not share our belief, we know that our Father is using these tests to help us progress so that if we prove ourselves worthy, we can also become Gods and Godesses. We cannot be ready for that with just theoretical teaching, without experiencing all that we experience, making mistakes, learning and showing what we have learned by passing the next test.

What a beautiful plan we are a part of. What a loving Heavenly Father we have. What a blessing I have to have a knowledge and testimony of it.

“Tests and trials are given to all of us. These mortal challenges allow us and our Heavenly Father to see whether we will exercise our agency to follow His Son. He already knows, and we have the opportunity to learn, that no matter how difficult our circumstance, ‘all these things shall [be for our] experience, and … for [our] good’ (Doctrine & Covenants 122:7).” Elder Robert D. Hales, "Waiting Upon the Lord: Thy Will Be Done", October 2011, General Conference
at November 13, 2011