I coulda/shoulda named this one “The Long Post of a Thousand Links” so get ready!

Wednesday night I went with my friend Tamara to an awesome concert in where 9 talented bands competed to be the top 2 to play at The Stadium of Fire in July, where the winner of that battle will win $10,000. After the 9 bands played their sets, while the judges were deliberating, Dave Barnes played and sang. I seriously don’t know where to start to share all this music with you. I hope you find a few that you like.

Before I share the music, let me tell you about Topblip.com, the world's entertainment radar. Never heard of them? Well, they have 113,000 likes on Faceook, so lots of people have. Maybe you remember that I have posted about Reverbnation.com before cuz I love it. Topblip is similar in some ways. I just created an account today, so I’m sure there’s lots I don’t know about it yet. Just like on Reverbnation, artists worldwide can post videos and listeners can watch them and rate them. Members can follow each other and post status updates.
If you are an artist, it’s great to know that there are prizes every week to the top videos and there are tournaments to compete to open for big names at their concerts. Topblip.com created this competition to sing at Stadium of Fire, starting with almost 3000 singers submitting videos online to participate. Viewers voted online and whittled it down to the “Elite 8”, but then there were 9 at the concert. I don’t know why. I cannot imagine how many submissions they will have next year for this competition with 3000 on their second year.

Since the artists post videos, but not just audio files, there are no playlists that you can create and listen to, as far as I have found so far, which disappointed me since it is one of my favorite things about Reverb. Still, it’s a really cool resource to find great indie music.

Justin and Sean Bingham are brothers and co-founders of Topblip.com.

The brothers both spoke briefly at the beginning of the concert and then they introduced the emcee, Trey Warner. He started making jokes and introducing the first band and I thought he looked a lot like Will Ferrell. Then I thought maybe it was just me, so I asked Tamara, and she agreed. Then later in the concert, between performers, he joked about how often he is told that he looks like a young version of Will. So it wasn’t just me. What do you think? 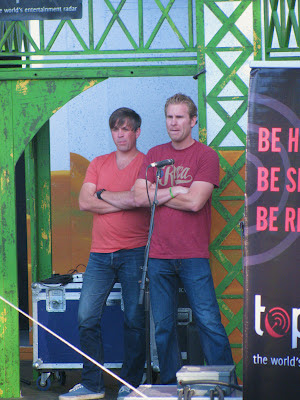 That's Trey on the right next to Dave Barnes on the left. 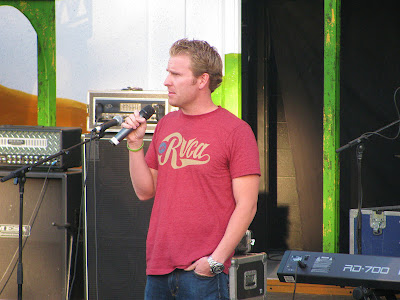 Okay, on to the música. I guess it’s fair to start with the 2 winners. The first one is a local singer who I blogged about last year Here before I listened to him live, but have since seen several of his performances and he and his band are always A-MAZING. A definite star! Sometimes he plays with a whole band (trumpet, sax, drums, bass, guitar, back-up singers) and sometimes it’s just him and the keyboard. If you wanna have a chance to hear him, he’s playing at a free concert at the in on June 29th at 7:00 or check him out on Reverbnation or Topblip. 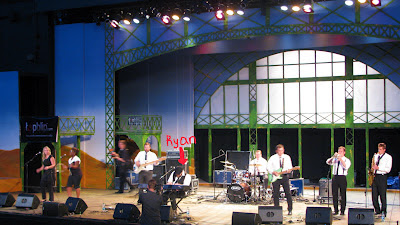 The other finalist chosen was Carl Dylan , a singer from who now lives in and came out for the competition. I never heard him before the competition. He has lots of energy and had a big smile during his whole set. Nice sound and fun to watch.

Callie Moore came in from and has been writing music on the bass and guitar since she was 12. She performed this song Wednesday that is in the video below for her mother, who died of cancer. She says she plays pop, jazz or folk music, depending on the song.


Vanladylove is a group of three singers--Travis Van Hoff, Caleb Loveless, & Garret Williams. With a unique sound and an interesting mix of instruments, depending on the song. At the concert, they had 4 other guys in the band with them and they all sounded great and looked like they had fun. All of their videos are of covers, which is okay, but I really like to hear original material. 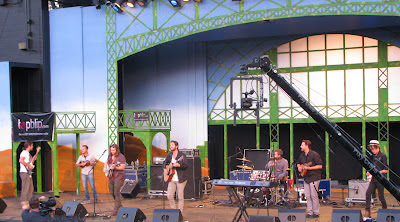 Joe Banua came out as the only solo artist, no back-up singers or band memebers—just him and his guitar. He’s from and sings Christian pop. He auditioned for American Idol this last season and they even showed him on the show, but didn’t get to go on, but he hasn’t given up. During the online competition, he was singing with Ethan Jones, but competed alone. Not sure what happened with that, but he was great all on his own.
I posted about Spencer Glenn in this post last year. He and his band make fun, original music. He has lived in different states, but was singing here in and I heard him perform. In May, they had a farewell concert because the Spencer is moving. I guess this was their actual final concert though.

Ty Mayfield was the unexpected 9th artist to compete in the Elite 8 and I'm glad he was included. He is a pop artist from and after his debut album, his music was played in Hollister & Ecko stores.  His hat seems to be his thing. He wore it at the concert and on his album cover. We got to sing the “Hey, hey” part of this song at the concert. Fun!

I first saw The Neighbors last year, remember?  And have seen them perform several times since. They are a super-talented brother-sister team (Adam & Rachel) who can both play drums, guitar and keyboard and write quirky, original music. They are one of my favorite bands and so fun to watch. Apparently, they added a member named Ed who played with them at this concert. This video is of them performing at the Provo Rooftop Concert in October and my kids and I were there in that big crowd watching and cheering.


The final artist that was competing for a spot at Stadium of Fire was an impressive group of young guys, all under 20 years old, called  from . They are lots of fun to watch because they are so energetic, happy and talented. I posted this song since it’s an original and catchy, but if you are into covers, they have several on their YouTube channel like this One Direction mashup and Payphone which are pretty entertaining and you get to see them sing and play instead of just lyrics. 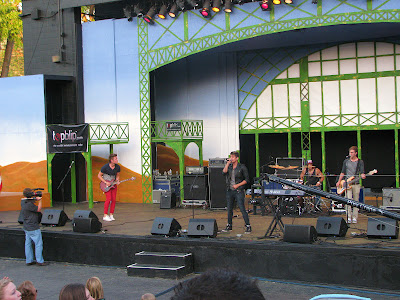 Like I said at the beginning of the post, while the judges were deliberating, Dave Barnes performed. Do you know who he is? You have probably heard him singing the song he wrote God Gave Me You on Pandora or maybe you have heard Blake Sherton's version on the radio. (Can you imagine getting a call from Blake Shelton wanting to sing your song???) I’ve had that one on my playlist for quite a while. I don’t know how many people know his other songs that have been used on tv shows and movies. They are beautifully written and his voice is so soothing. Many of his songs are romantic like Until You, I Have and I Always Will, and On a Night Like This (and lots more), and they will mellllllt your heart.  But the one I’m sharing on video is about lies, so not too lovey, but very catchy. He had the audience sing along with the “la la la la la la la” part, so sing sing along too while you watch.

The Topblip guys said that when they were considering who to get to sing at the concert, they were so excited about the possibility of Dave Barnes because of his music, but also because he has remained grounded and a real family man even with his fame and that he’s a really good, clean, humble guy. Several people talked about how funny he was and when he came out, he talked in between each song and proved he really is very funny and has a definite stage presence. 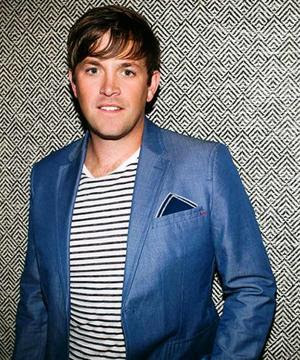 He grew up in and plays lots of shows in —hot and humid. Dave mentioned several times how beautiful the weather was here. It was dark by the time he performed in the outdoor theater and it was cool and breezy.  He is absolutely one of my favorites now and I hope you check out some of the links to his videos. (I walked right past him and didn’t even think to stop him and ask for his photo.) His music right before announcing the winners was a great way to end the girls’ night with Tamara!

Sooooo, that was a really long post, and just like I warned you, had lots of links. If you got to watch any of the videos, do you like any? I’d love to know which ones.
at June 15, 2012