I seem to have a bit of an obsession with potatoes and when I saw these at Diethood I had to make them. I made them tonight and devoured  several of them. They are similar to the Ecuadorian Llampingachos that I make, but slightly different.

After processing the boiled potatoes in the food processor instead of by hand, I threw the other ingredients into the processor and quickly mixed it. In the photo, you can see that I used red onion. These are garlicky and I like the crisp outside.

In case you would like to try some of the other potato dishes I like, I have also made Mashed Potato Puffs and Mashed Potato, Cheese and Chive Waffles and posted the recipes. 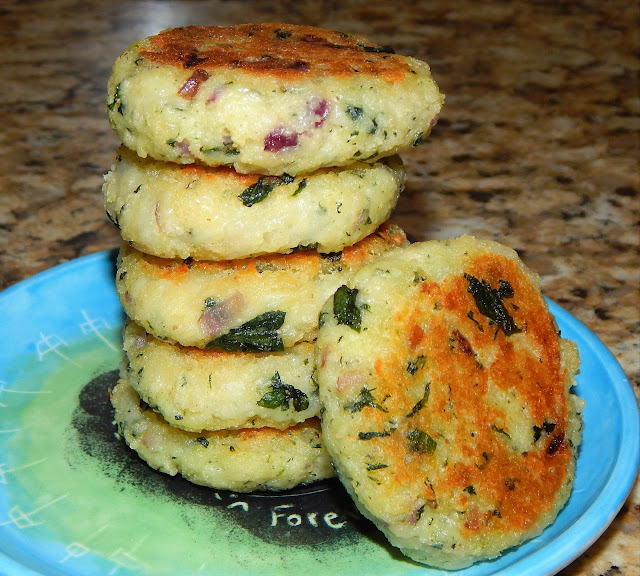 Combine prepared potatoes and milk in a large mixing bowl; using a potato masher, mash the potatoes until smooth and creamy. Set aside.

Heat 1 tablespoon butter and 1 tablespoon olive oil in a large skillet over medium heat. Add chopped onions and cook for 2 to 3 minutes, stirring occasionally, until translucent. Add spinach and garlic to skillet; season with salt and pepper and continue to cook for 2 more minutes, or until spinach is wilted.

Remove from heat and add spinach mixture to the potatoes. Stir in cheese and lemon juice. Add egg and panko/bread crumbs; stir until thoroughly combined and smooth.

Shape the mixture into patties. Heat olive oil in a large skillet. Working in batches, fry each patty on both sides until golden brown; about 3 to 4 minutes per side. Transfer potato patties to a paper towel–lined plate.

Serve with yogurt, sour cream or soy sauce, if desired.

Email ThisBlogThis!Share to TwitterShare to FacebookShare to Pinterest
Labels: recipes, side dish